He was born in Manchester in 1892 and was at Bootham between 1906 and 1908, where he was Secretary of the Reading and Discussion Society.

He is buried at the Cite Bonjean Military Cemetary, Armentieres. 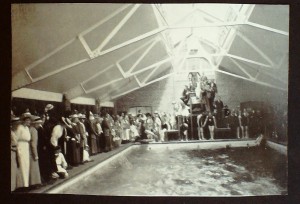 The new swimming baths, opened in 1914

Henry Kenneth Fisher was at Bootham between 1909 and 1914, and remembers the then-new swimming baths. They were opened in 1914, so it was the centenary of the baths two years ago. “Then in my last year came the cutting down of the trees to provide for the building of the long awaited swimming bath. The teams of magnificent horses that dragged away the tree were the subject of my first photographs and I still have them. What a joy that splendid new bath was after the horrors of the old open-air Marygate Baths where the water was covered with leaves, soot and algae, and the surrounding slabs were so slimy as to constitute a veritable ‘death-trap’ to the unwary.”

Moving a little further forward, Douglas Stewart Jackson, who was at Bootham between 1939 and 1943, recalled his time at school during the Second World War. He remembered that: “I don’t think life at school was affected to any great extent by the war. The school staff may have had different feelings about the situation, some were called up for service in the forces and some pupils got involved in routine jobs that could be handled safely by those with a limited knowledge of the work and necessary safety precautions. A couple of us became ‘school electricians’ and having learnt the skill required to change lightbulbs, moved on to mending fuses and attempting to find and repair the cause of the problem. I do not recall either of us receiving an electric shock, but I am sure we did many minor jobs that would have been considered far too dangerous by the modern ‘Health and Safety Executive’.” He goes on to remember the air raid on York in 1942. It happened while the school was closed for the Easter holidays, and the main damage to school buildings was the destruction of the old ‘Lodge’ (the Bootham term for the health centre) at the school end of Portland Street. Douglas says that “At about this time there was discussion regarding ways in which pupils could become involved in activities which could help the people of York to overcome some of the adverse affects of the war. This was looked upon as a Quaker equivalent to the Officer Cadet Training Corps run by most boys schools. It started off with a series of practical training classes in bricklaying, cement and concrete manufacture and on a more basic level an attempt to salvage a high proportion of the undamaged bricks on the site of the Lodge. I thoroughly enjoyed this training and I think it was some of the most useful skills learnt at Bootham.”

This has just been a few snippets from the memories of a few people about their time at Bootham, but I hope that it has given you an idea of the extra detail and insight that can be gained from people’s memories, particularly if you then integrate that with other records.