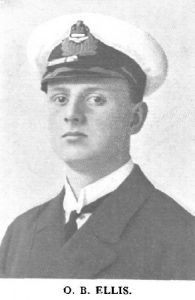 Oliver Bernard Ellis was killed in active service over the German lines near Arleux on 19th May 1917, aged 18 years.

He was from Leicester and attended Bootham School from 1912 to 1916.  He was a keen sportsman at school, and also very interested in natural history and photography.

The March 1915 issue of Bootham Magazine tells us:

“After the absence of competitors last year we are pleased to welcome the work of three ornithologists. O. B. Ellis, of Leicester, shows an extensive series of observations, illustrated by photographs and lantern slides. These include an excellent series, starting with the cuckoo’s egg in the hedgesparrow’s nest, and showing the development of the cuckoo and the fate of the young hedge-sparrow. The black-headed gulls and other water-fowl at Skipwith have been studied and illustrated by a further series of creditable photographs. There were extensive fatalities among young gulls, but some suspicion cast upon owls seems to have been dispelled by careful examination of their pellets. A long essay on ‘ How Birds Protect their Eggs ‘ shows that O. B. Ellis has tried to arrange his observations and make them of value. We award him an exhibition of £7.”

Oliver had found the newly-hatched cuckoo fledgling in a nest on Strensall Common.  He made a unique photographic record if its growth by cycling to Strensall every other day.  To maintain the sequence, Oliver had on several occasions to break out of School before dawn, take the photographs when there was enough light, and then get back in time for “Silence”.

When he left, the school magazine, Bootham, wrote of him:

“O. B. ELLIS excelled in all forms of athletics. He was a brilliant and daring gymnast, weathering all hurts. He was an able goal-keeper, where he obtained his 1st Masters’ colours, and, later, played at outside right. At cricket he obtained his 1st eleven colours. Last year he obtained the Silver Medal of the Life-Saving Society and served on the Athletics and Football Committees. Last year he tied for the Senior Athletics Cup, and helped to command the Fire Brigade. He was a wonderful practical photographer, and was very patient over his ornithological excursions with the camera. He was a curator of ornithology and the N.H. [Natural History] rooms, and two years ago obtained the Old Scholars’ Prize. He leaves from the Upper Senior, and was a reeve [prefect].”

Oliver had a place at St John’s College, Cambridge and had hoped to take up his residence there in the autumn of 1916.  However, he joined that Royal Naval Air Service in June 1916.

He was trained at Redcar R.N.A.S. Station for three months.  In November he was transferred to Cranwell where he quickly qualified for his first class pilot’s certificate.  In March 1917 he was confirmed in the rank of Flight Sub-Lt.   He left England for Dunkirk, and shortly afterwards to the front in Flanders, and then to Squadron No 1 R.N.A.S., near Arras.  On May 20th he was notified as “missing” and enquiries found that he had gone down on May 19th in an engagement with a superior force over the German lines, “east of Arleux”.

“……I am afraid I was not actually leading the patrol you mention on the 19th May.  I was leading one patrol and was joined by another in which your son was.  We became engaged in a bit of a fight, and your son gave a very fine account of himself indeed.  He has already shot down one of his opponents when I say him attacked by another.  Your son was very tenacious and fought it out, and went down out of control through the clouds……. “

“…. Although your son was not with more than a few weeks, I had formed a high opinion of him as an officer and a fighting pilot.  A cheery messmate, always trading for any work or play, he is a great loss to us ………. Your son has helped us to maintain our present superiority over theGerman air service, which is essential to winning this war, and that is a valuable service to our country…..”

The Headmaster wrote in “The Friend”:

“Oliver Ellis came to Bootham from Sidcot with a reputation for genial friendship and for holding the junior sports championship two years in succession.  He proved himself a fearless football player, a brilliant and daring gymnast.  He took a good position in class, and did excellently in his pilot’s examination a few months ago.  He was a keen ornithologist and a forceful reeve – full of the spirit of adventure when he left school less than a year ago.  His loss will be felt in a large circle of friends, for his has left behind him that worthier thing than tears, the love of friends without a single foe.”

The news of his death made a deep impression on the school.  One of his school-fellows says:

“We could scarcely believe that one who possessed his gifts had been taken so soon.  His energy and spirit, combined with remarkable thoroughness, made his a leader in every undertaking; and his open honesty made him the true friend of all who knew him.”

In a letter home, dated May 3rd 1917, Oliver had written  “….. thank God that I’ve got the safest job in this war. Don’t worry about me, I’m having the time of my life and am enjoying myself hugely, and the war can’t last for ever.”

Oliver was the subject of a series of articles for Explore Your Archives week in 2014. More may be read about him here: