Arthur Reginald Deane died on the 14th November, 1917 of wounds received in the War, aged 22 years.

“A. R. DEANE leaves from the College Class, having passed Matriculation last January. He was two years at Bootham, during the whole of which time he played cricket and football for the 1st XI, being captain of the former for his last term. He won the Senior Cup at athletics this year, after a close fight. He represented the School against St. Peter’s at Fives. He was a reeve during his last year.”

The football captain wrote of him:

“DEANE, A. R.—Has faithfully served the school both as secretary, and as centre forward. He is a clever and a dashing player and shoots well.”

and a cricket captain:

“A. R. DEANE.—A close competitor for the O.S. bat, having scored well in many useful and attractive innings. An effective, though risky, on stroke off the leg stump is his favourite. Ought to make a good medium bowler; very successful once or twice. Neat and quick in the field and in return.”

After Bootham, Arthur was pupil to H. F. Knight & Co., Chartered Accountants, living in Middlesex.  He became a Second Lieutenant in the Royal Sussex Regiment in October 1915.  In June 1917, “Bootham” reported:

“A. R. DEANE writes from the 2nd Riding Sussex in France to say that he must say nothing.”

Then in December 1917 issue of “Bootham” reported:

“A. REGINALD DEANE was a boy of a shy and sensitive temperament, whom it was not easy to get to know, but with whom friendship was a great privilege.

Coming to Bootham at a fairly advanced age, and going straight into the Matric. class, he won his way to a leading position in the School by ability and industry, for he had few of those more striking qualities which readily command the homage of other boys.

He did not easily do himself justice, and needed two tries for Matric. But I always felt that he had plenty of mathematical ability, with a keen, clear mind. He made an excellent but unobtrusive Reeve, played for the football, fives and cricket teams (being Captain of the latter), and won the Athletics Championship. He was a keen sportsman at them all.

In 1912 he was articled to a firm of chartered accountants, and there he displayed a cheerful industry and efficiency, gladly accepting- any task, however humdrum. His writing and neatness were admirable, and typical of the courtesy and thoughtfulness of his nature as well as of the gentlemanliness of his whole bearing. Though sensitive, he never showed resentment.

His experience in France had developed him remarkably —physically, mentally, and every way. Still entirely devoid of “side”, he was devoted to his duty, and most considerate of his men. He was in very deed an officer and gentleman.    F. H. K.”

Eric did well at school.  He won the Edgard Pickard Prizes for Instantaneous and Time Photography.  In 1913, he played the part of Demetrius in the school production of “A Midsummer Night’s Dream”. The December 1914 issue of the school magazine “Bootham” records:

“E. B. BUTLER leaves from the Upper Senior after a stay of two years at Bootham. He came here from Sidcot, and, like most old Sidcot scholars, he was an excellent photographer. His hobby was ornithology, and with the help of his camera he was able to show up a very creditable diary. He was a keen footballer, and was awarded his first Boys’ colours as outside left; at cricket, too, his steady batting secured him a permanent place  On the 2nd eleven. He was a steady longdistance swimmer, but owing to a visit to the Continent he was unable to stay for the Aquatics, and so lost his chance for the Cup. He leaves after passing Matric with honours.”

In September, 1915, Eric and another Bootham Old Scholar, John Lancelot Gibson (1910-13), obtained their commissions in the same Howitzer Brigade. The March 1916 edition of “Bootham” reports, under War Lists:

“E. B. BUTLER (1912-14) may possibly be remembered by one or two still at school, amongst other things as a sportsman and one of considerable athletic ability. It was in the then new Swimming Bath that he especially distinguished himself.

At the declaration of war he was with his family in Switzerland, whence it seemed at first that the chances of return were small. Some nine months later, however, he was able to come home, and on reaching the age of eighteen at once joined the O.T.C. at Cambridge. After a month of training he obtained a Commission in the Northumbrian Brigade of Howitzer Field Artillery and went through a further course in England and at camp in Ireland. In March, 1917, he went out to France and was killed near Ypres on September 30th.

His father tells us that his letters home were always cheery, but that it was noticeable in him—as, indeed, it must be in many another who has come to live upon “hand-shake” terms with death that he felt himself to have come into close touch with the realities of life.

The extract which we append from his Battery Officer’s letter, explaining the circumstances of his death, shows his complete carelessness of danger, his thought for others, and his thoughtlessness for self. After a  very hot time” for three days in the most advanced gun position a shell dropped amongst the men of his battery, killing three and wounding seven.

“Butler,” the officer writes, “was in a dugout with me, and, although things were very bad at the time, he immediately went across to the men, and by his manner and example stopped all panic, and started binding up our wounded—the wounds were awful. He then arranged for the ambulance to come up, and helped to evacuate the wounded. He was simply splendid.

“We decided to send the men back then, as it was useless keeping them there any longer, but I wished to stay for a time, and Butler remained with me.

“The shelling had practically stopped, and as I came out of the dugout I noticed a fire in some old ammunition boxes. I remarked to Butler, ‘I hope that fire does not get into our dump.’

“I had hardly said the words when he ran straight over to the fire, jumped down into the gun-pit, and began throwing the burning boxes out. Two Australians came along shortly with buckets of water and managed to put it out. Butler was still in the gun-pit making sure that everything was all right, when I heard him shout, ‘ Look out! This ammunition is on fire,’ and almost instantly it went up.

“We shall miss him dreadfully, and my personal loss is great. He was most popular both with officers and men, and I hear the latter speak of him as ‘the bravest fellow they have ever seen.’

“At the time of the explosion I was blown 30 yards away, and have hardly any recollection of what took place afterwards; I can only say, your boy died the death’ of a very gallant man.”

Second Lieutenant Eric Busvine Butler is remembered at the Tyne Cot Memorial near Ypres in Belgium.

In March 2016, a group of Bootham School History students visited the Tyne Cot Memorial.  Here they are pointing out E. B. Butler’s name on the Memorial: 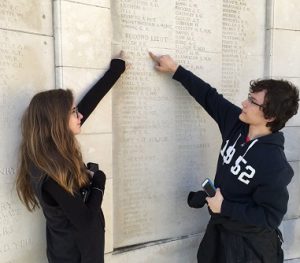 A photograph of E. B. Butler hangs in the History Department at Bootham School.  In 2014, the school’s Director of Music, Paul Feehan, was inspired to write a Requiem Mass, “Deeds of Angels”, in memory of him and others like him.” He said:

“Just recently we came upon a portrait of Eric Busvine Butler, one of our old scholars who was killed at the battle of Ypres. He was just 20 years old when he died – his young face looking out from this formal military portrait makes a deeply moving image. The requiem is for him and others like him, but it also remembers those who chose another path, that of conscientious objector.”

“Deeds of Angels” was premiered at a public performance on 14th September2014 at Bootham School.