This post continues from Part 4, and is part of a series for Explore Your Archives week.

Oliver Bernard Ellis left Bootham in 1916. The bene decessit in the magazine (a paragraph about each leaver) reads:

“O. B. Ellis excelled in all forms of athletics. He was a brilliant and daring gymnast, weathering all hurts. He was an able goal-keeper, where he obtained his 1st Masters’ colours, and, later, played at outside right. At cricket he obtained his 1st eleven colours. Last year he obtained the Silver Medal of the Life-Saving Society and served on the Athletics and Football Committees. Last year he tied for the Senior Athletics Cup, and helped to command the Fire Brigade. He was a wonderful practical photographer, and was very patient over his ornithological excursions with the camera. He was a curator of ornithology and the N.H. rooms, and two years ago obtained the Old Scholars’ Prize. He leaves from the Upper Senior, and was reeve [prefect].”

Oliver joined the Royal Naval Air Service in July 1916, and by March 1917 he was in Dunkirk. Some of his letters home were published in ‘Bootham’ magazine, here are some extracts:

April 21st 1917: “The F.A.U. dentist who I went to the other day said, ‘Let me see, you’re the man who tried to whitewash the roof of some railway buildings in York, aren’t you?’ He was an Australian, but his assistant was a man I was at school with at Sidcot!”

April 24th 1917: “I saw a little owl tonight, and heard lots of patridges calling. It was simply a ripping evening, and I almost expected to see an old curlew flying over.”

May 3rd 1917: “somehow the quiet freshness of Warwickshire seems far more fascinating than ever it did before, and the thought of perfectly white flannels and a perfectly flat cricket ground seem to be things only to be found in heaven. I think I’m going to live in white flannels when I get home. Does anyone play tennis this year?…The chances are one in a hundred in our favour, and there we must leave it, having reduced it to that, and thank God that I’ve got the safest job in this war. Don’t worry about me, I’m having the time of my life and am enjoying myself hugely, and the war can’t last for ever.”

On May 20th 1917 he was reported missing. Then the news came that his plane had been shot down on May 19th, and he had been killed.

Here is his entry on the Commonwealth War Graves Commission website.

After his death, his parents presented the school with the Oliver Ellis medal for athletics, in memory of their son.

Note: I hope that this week has helped to show how stories can be pieced together in an archive. There is still scope for far more research on this story, and many others in the archive.

There is an enormous range of archives nationally, with diverse collections, and they contribute in all sorts of ways, including education, business, identity and democracy. I hope that you will be encouraged to explore your archive. 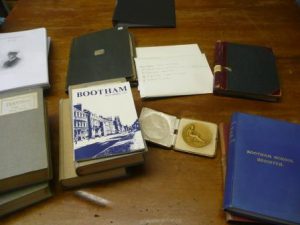