He was born at York in 1895 and was a grandson of Joseph Rowntree, the Quaker chocolate manufacturer and social reformer of York.  He attended Bootham School from 1907 to 1912.

Lawrence took part in many activities whilst at Bootham.  He was a member of the Junior Essay Society and gained mentions in Aquatics reports.  In the Conchology report of the Natural History Society report (“Bootham” magazine, February 1909):

“This subject has attracted no fewer than ten collectors during the year, and several of them have made really good collections. ………L. E. Rowntree’s collection contains 14 new species. Collectors have been very energetic over their work, diligently carrying shell-scoops on all excursions. Many places have been visited, amongst others Askham Bog, Castle Howard and the Foss.”

In the Archaeological Diaries report of the Natural History Society report (“Bootham”, March 1910):

“With two exceptions, there are no original photographs, and in most cases we should have liked to see more illustration, either in pen and ink sketches, or pencil drawings.

L. E. Rowntree’s mouldings are very effective. We think that all who take up archaeology ought to make a particular study of this branch of the subject, for mouldings are to a right understanding of the different periods what factors are to algebra—often the shortest and best clue to a difficult problem.We should like to encourage more of this in the diaries for another reason. Many of us are not artistic, and cannot “make a picture,” but we can copy a moulding fairly accurately, and can draw a section of a pillar or string course, so as to make a valuable addition to our diary.”

In 1911, Lawrence was a curator of Astronomy and a librarian for the school Natural History Society.

By The 1910-11 season, Lawrence was playing football in the school second XI and had joined the committee of the Senior Essay Society.

“Bootham” of November 1911 reported that Lawrence, amongst others from Bootham, had gained the bronze life saving medal at an examination at the St George’s Baths.

By 1912, Lawrence had become a Reeve at Bootham, equivalent to a prefect.

Lawrence joined the school fire brigade.  “Bootham” magazine of November 1912 reported that in the school term of summer 1912:

“A fine display was given by the School Fire Brigade under the captaincy of L. E. Rowntree.”

“L. E. ROWNTREE leaves from the Upper Senior after passing the Cambridge Previous Examination. He was at Bootham five years and a reeve during his last year. He played for the ist Boys’ XL at football and was on the Tennis Committee. He was an efficient secretary to the Senior Essay Society and a member of the Natural History Club Committee. In aquatics he was prominent and won the Silver Medal of the Royal Life Saving Society. For his last term he was an able and energetic captain of the Fire Brigade.”

After studying at Haverford Quaker College, Pennsylvania, near where father was buried, Lawrence became a medical student at King’s College, Cambridge in October 1913 but left in 1914 at the outbreak of the war to join the Friends Ambulance Unit.  He trained at Jordans, the Quaker Centre in Buckinghamshire, and on 31 October set off for France led by Philip Noel Baker (another Bootham Old Scholar).  Lawrence took his grandfather’s Daimler abroad with him, to his grandmother’s disapproval.  The December 1914 edition of “Bootham” has a report on the Anglo-Belgian Ambulance Unit and Lawrence is listed under a section entitled “Dressers, Orderlies, Ambulance Drivers, Stretcherbearers, etc.”  While in France and Belgium he wrote a diary, entitled ‘A Nightmare’.  The original is in the library at Friends’ House in London, and a copy in the Borthwick Institute, York University.

The December 1914 edition of “Bootham” also reported that:

“The following are, or have been, working with the Friends’ Ambulance Unit :— Rowntree, L. E., Clerical Staff, York.”

During 1916, Lawrence left the Friends’ Ambulance Unit and enlisted in the Army in the Motor Machine Gun Corps, “C” Company of the newly-formed Heavy Section, later known as the Tank Corps.  He was posted to the Somme in France. All the tanks in the British Army were at Ancre in the first ever tank battle.  Lawrence was injured and while home recuperating decided to apply for a commission. He was accepted and became a 2nd Lieutenant in the 26th Army Brigade, Royal Field Artillery.  It was at the Battle of Passchendaele, the 3rd Battle of Ypres, that he was killed in action, on 25th November 1917.

“Bootham” of May 1918 published an “In Memoriam” piece for Lawrence as follows: 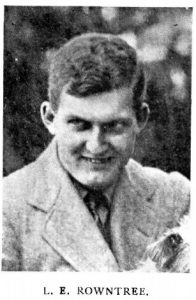 “L. E. ROWNTREE.  His friends will perhaps remember Lawrence Rowntree best when he was at home.  No form of outdoor life came amiss, and he entered with equal zest into any of the many recreations he liked.  Motor-cycling was one of his great hobbies, but whatever the accident or however untoward the incident he always kept on smiling. Indeed, it was his unfailing cheerfulness, a fund of good stories, and his constant thought for others that made him such an excellent companion. -He was a Reeve during his last year at school, and, besides winning a much-contested place on the 1st Football XI., he took a prominent post in the Essay, Debating, and N.H. Societies. Many will remember the time and care he lavished on a hydroplane which he built in the workshop, but which, alas!, would not float.

Some will know John Drinkwater’s lines in “The God of Quiet ” : ” And the hate Of blood for blood, and bone for bone, can find No habitation in the quiet mind. . . . ” Probably all Old Boys have this quiet mind. Lawrence Rowntree certainly had it in a large degree, and as his friends are realising how much a part of their lives he was they are also realising how irreparable is their loss.

Second Lieutenant Lawrence Edmund Rowntree is buried in the Vlamertinghe New Military Cemetery, near Ypres.  His headstone bears the inscription, Only son of JW Rowntree, Scalby.  “I believe in the life everlasting.”