This week will see a series of posts about Oliver Bernard Ellis as part of Explore Your Archive week.

I noticed his name when going through the lists of diaries that we hold, and recognised it, both from the work I have recently been doing on the First World War, and also from the athletics medal that was given in his memory. I was looking for a story to investigate to create a virtual ‘story box’ for Explore Your Archives, so decided to see what else I could find about him.

The first port of call when finding out about individuals in the Bootham archive is generally the Bootham Registers. These are books which were printed in 1914, 1935, 1971 and 2011. They list all the students who had attended the school until that date, and include dates at school, names of their parents, spouse and children, as well as details of education, occupations and interests.

From the Registers I could find out that Oliver was born in Leicester in 1898, and his parents were Bernard and Isabel Ellis. Looking at the other people named Ellis in the Register, it turns out his father and brother (Colin Dare Bernard Ellis) also attended Bootham. The 1914 Register mentions that Oliver won the 3rd Prize for Natural History Diary in the Interschool Diary Competition in 1913. The 1935 Register includes the details that he joined the Flying Corps during the First World War, and was killed in action in 1917.

I checked the ‘Bootham’ magazine for 1912, and found that he was listed on the Summer Term 1912 List of Boys as entering that term (as number 86 in the school). 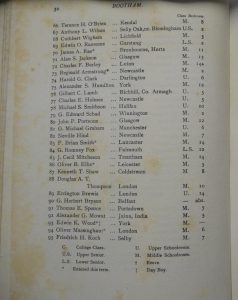 The next place to check is the ‘Bene Decessit’ which is a paragraph written about each leaver in ‘Bootham’ magazine. Oliver’s (in the October 1916 edition) mentions that he was an excellent athlete and a “brilliant and daring gymnast, weathering all hurts”. He also helped to command the school fire brigade, and “was a wonderful practical photographer, and was very patient over his ornithological excursions with the camera.”

After noticing that he was noted for athletics, I looked at the catalogue for our sports records, and found the book of athletics results that started in 1916 (unfortunately we don’t have an equivalent book for pre-1916). (The work I’ve done recently to add detail to the catalogue entries for the sports records is now paying off!) Oliver’s name was listed in the top three in every senior race, and the open mile, and he was joint first for the senior cup. 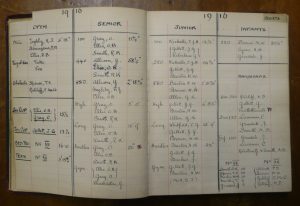 There was also a photograph in the sports records of him doing a high dive in 1915, using an unconventional technique.

Finding an article in the November 1976 ‘Bootham’ magazine that was written by Alexander Mowat, one of his contemporaries, helped to shed some light on the story behind the photograph. Checking the Athletics notes in the June 1915 ‘Bootham’ magazine, the notes about the sports day include: “O. B. Ellis came forward with a remarkable High Jump, consisting of a dive and somersault, which the judges regarded with considerable suspicion. Subsequent consulting of the rules of the A.A.A. has ruled it out, to the regret of many who thought it a very pretty and skilful feat. Our sympathies go out to Ellis, who is thus deprived of first prize.”